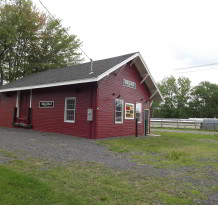 Because of its centralized location in the state, Southington became a transportation hub; a place where there were many ways of moving products and people. The history of those different modes of transportation can particularly be seen in the Milldale and Plantsville sections of town, both which had several large manufacturing plants and businesses.

Early on, Southington roads were used to transport products and passengers up and down the valley. Unfortunately the roads, many of which were not much more than dirt trails established by American Indians, were narrow, bumpy and sometimes muddy, especially in the spring. Wagons and carts pulled by strong beasts of burden could take products and people within town, to neighboring communities and weather permitting, the region. During the early and mid-1800s, stagecoaches became popular.

In 1828, the Farmington Canal opened, and proved to be a technological transportation improvement. After taking three years to dig, mostly by hand, the canal operated from 1828 to 1848 and was located between Northampton, Mass., and New Haven.   Although products, produce and passengers could be more easily taken back and forth from this area to Long Island Sound on small freight and packet boats, the canal was limited to being operated in good weather and would shut down during the winter.

The next transportation improvement was the train, which could move more materials and people via rails, some which were placed on the canal towpath. In the region, freight and passenger trains became the way to go in the mid-1840s. The locomotives, freight and passenger cars of the New Haven and Northampton Railroad operated between those towns.   Stations were built to serve Southington, Plantsville and Milldale. Passenger service ended in the mid-1920s, but freight stations served the region for many years. The railroad, also called the Canal Line, last hosted regular freight service circa 1996.

Milldale Train Depot along the Rails to Trails corridor near Clark Bros. Bolt Co. The historic train depot in Milldale near the former Clark Bros. Bolt Co. now serves as a rest station and historical transportation history display along the Rails to Trails corridor off Canal Street. The depot is open for visitors 9 a.m. to 4 p.m. on Saturdays and Sundays from Memorial Day to Labor Day. The Southington Parks and Recreation Dept. is slowly adding amenities for hikers, bikers and history buffs to use, including, portable rest rooms, picnic grounds and water fountain. Members of the historical society also have placed transit-related items on display for the public to see. On-site cameras connected to the police department serve to discourage possible vandalism as well as protect the building, grounds and artifacts.

Hollywood also came calling to the region – in 1958, a motion picture comedy, “It Happened to Jane,” starring Doris Day and Jack Lemmon, was filmed using familiar sites in Southington and Milldale.

During the late 1800s, trolley cars also proved to be a convenient way to move goods and people. Locally, three trolley companies served Southington, including the Southington and Plantsville Tramway Co., the Meriden, Southington and Compounce Tramway Co. and the Waterbury and Milldale Tramway Co. The Waterbury and Milldale’s tracks were located along Meriden-Waterbury Turnpike. However, by the late 1920s and early 1930s, the automobile became king and the trolleys ended their run. For many years, a trolley carbarn used for the storage and maintenance of streetcars was located behind the former Clark Brothers Bolt Co. in Milldale.

A network of improved roads later became the primary way to move products and people. Meriden-Waterbury Turnpike and later, Interstate 84 and nearby I-691 were well-built thoroughfares. I-84 from Waterbury opened in 1961, but the interstate highway wasn’t linked to Hartford until the late-1960s.