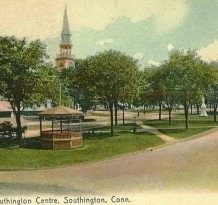 When local businessman James F. Pratt, head of the Village Improvement Society, decided to spearhead an effort in the 1870s to clean up was referred to as “Pigweed Park,” which was little more than a centralized garbage dump, he created the Town Green that residents know and appreciate today.

As the U.S. centennial approached in 1876, Pratt and other businessmen took steps to clean up the refuse, put in sidewalks and plant some trees. The town also began to raise money to erect a monument in honor of the soldiers who fought in the War Between the States.

By 1880 or so, donations to place the monument were successfully realized and “The Silent Sentinel” or “Soldiers’ Monument” became a focal point on the green.

During the 1880s and 1890s, the town green became a place where people could relax, hear band concerts, listen to speeches and witness celebrations and parades. 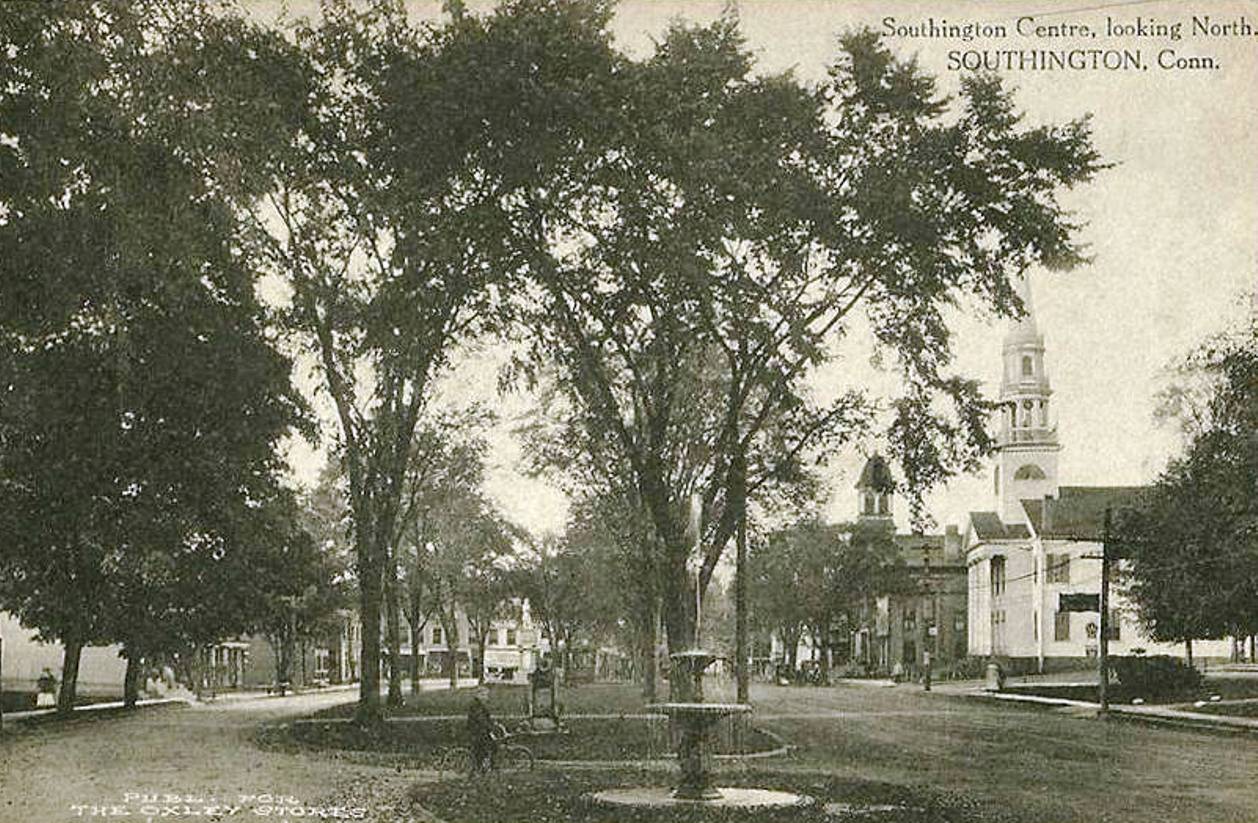 An old photo postcard from around 1900 shows the Southington Town Green, looking north. The Civil War cannon that was donated and melted down for a World War II scrap drive can be seen.

Eventually, a gazebo was erected at the northern end of the green. Early photographs show celebrations and somber commemorations such as Armistice Day (which later became Veterans Day) and Decoration Day (which became Memorial Day).

Philanthropist Emma Bradley Yeomans Newell, who was the daughter of Amon and Sylvia Bradley, provided the funding for several key monuments on the green, including a drinking fountain erected in 1918 to remember her father and an ornate trough that originally was meant at the time to quench the thirst of horses, mules, donkeys and oxen. This larger trough — which for many years was positioned at the southern portion of the green – was dedicated to her late husband, “Edward Yeomans, a friend of animals.” A smaller version was located in Plantsville center near Buckland Street before being moved to the more-recent Plantsville green across from Maple Street. The larger monument was moved to Recreation Park as the Southington green was made smaller over the years. Today, it has returned to Southington center on a small plot of land adjacent to the First Congregational Church.

In 1919, the officials and employees of Peck, Stow and Wilcox Co. erected a flagpole and monument that honored residents who fought in various wars, including World War II. For many years, an “honor roll” that was made of wood and glass honored those who served in various conflicts, including World War II. As that gradually deteriorated, it was replaced in the 1960s by large granite slabs affixed with bronze plaques to honor those armed forces members who served and fought in wars such as WW II, Korean War and Vietnam.

Two war-related relics, a World War I-era large gun and a Civil War cannon that once were on the Town Green are gone today, turned over by patriotic officials for scrap drives during World War II. Also gone are the umbrella-like huge elm trees that were planted right after the green opened in the 1870s and later fell victim in the 1950s and ‘60s to Dutch elm disease. 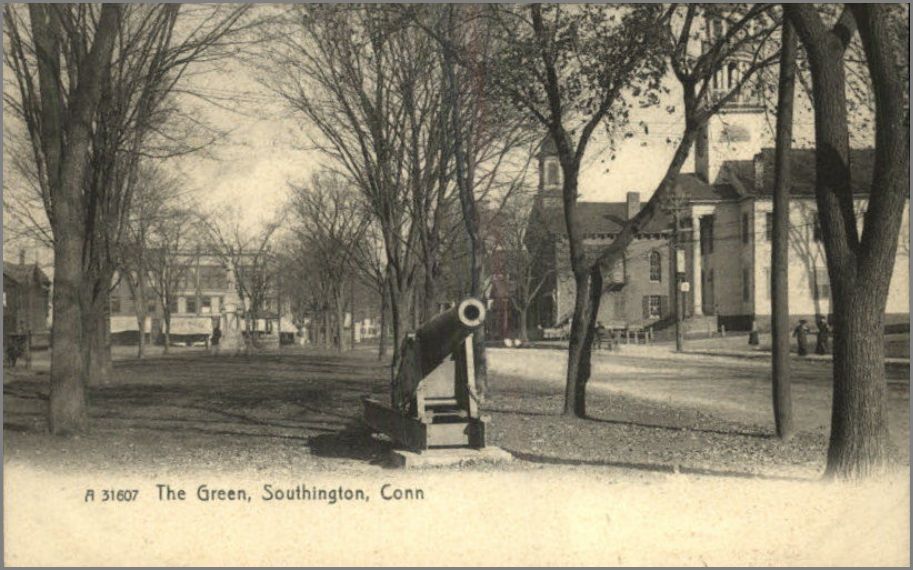 At one time, the green was much, much larger than it is today. Adjacent roads were paved, wider sidewalks were added and the traffic pattern near this prime piece of land changed drastically.

Columbus Avenue, a new road to honor Italian-Americans, opened in 1960. Later on, the green was squared off at its southern portion.

Two items on the green commemorate Southington’s bicentennial in 1979.

The first is an old-fashioned lamp and post that always remains lighted. The second is a time capsule that was buried in 1979.

The green was given a face lift for its 125th anniversary and as one of the turnkey projects that eventually saw portions of downtown Southington renovated, with vintage street lights, benches, trees and bricked sidewalks added. 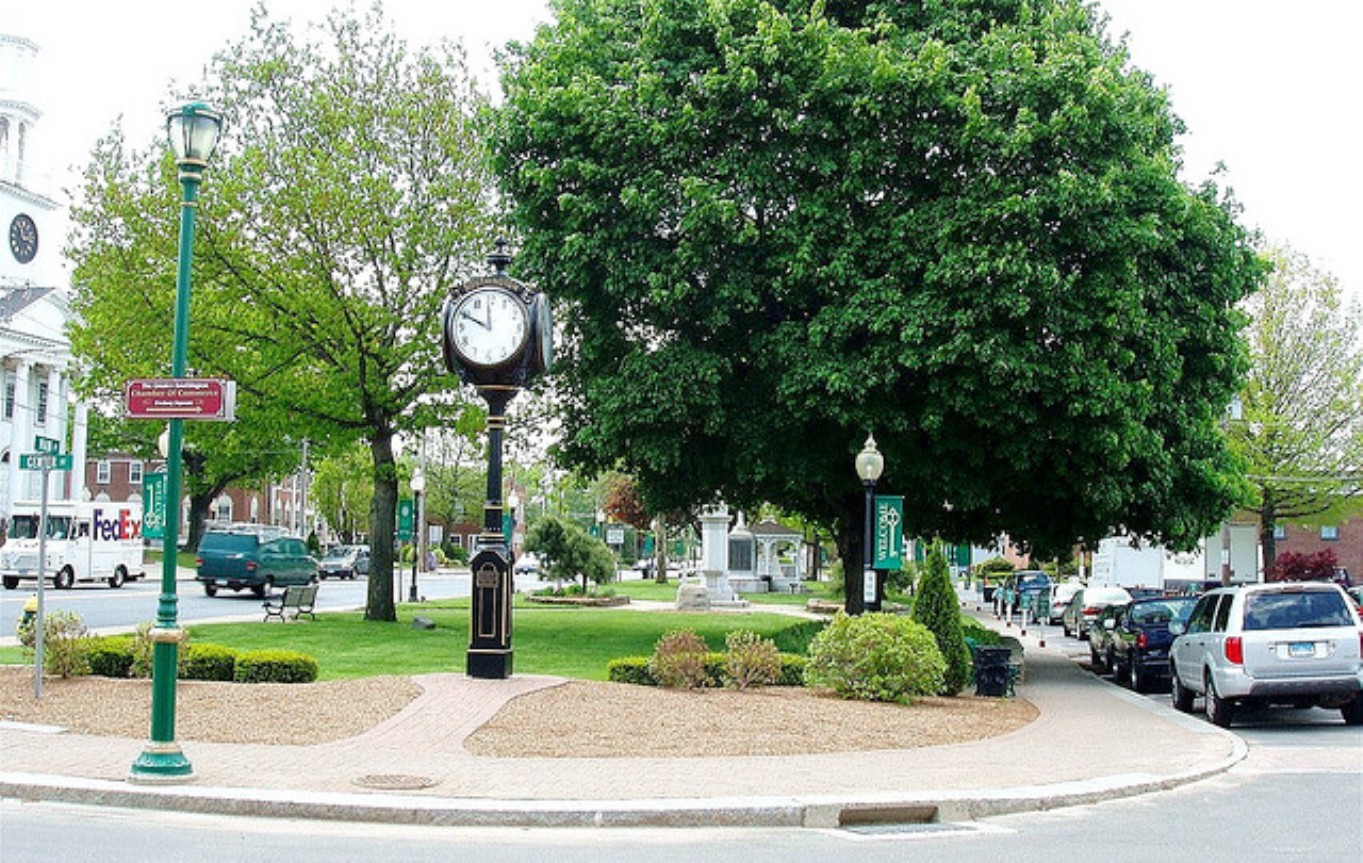 What became known as the Southington Renaissance Project became the most extensive renovation and sprucing up of the downtown region since the aforementioned time James F. Pratt lobbied local businesses to create a vibrant, attractive and workable Town Green.

James Pratt most certainly would be proud.